A book by Shirley Strachan 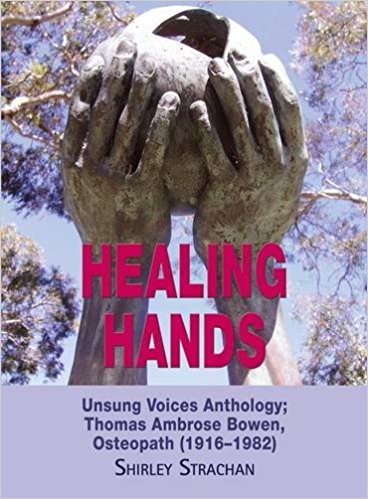 What was the world of Geelong's legendary Thomas Ambrose Bowen (1916-1982) really like? What do those who who flocked to him have to say about his talent to "fix them" when credentialed and envious others failed? Step into Tom's time - the '40s to early '80s, brought alive by the memory of touch and his attentive, but no-fuss presence. Meet his grateful patients and Rene Horwood, loyal clinic organiser and enduring ally to the end. There's Ron Garner, a forgotten comate till now who stops awhile bringing gifts of White Magic. Be surprised at what's in store and what three of his professional apprentices Drs. Neave, Smeeton and Ryan reveal about Tom's healing hands and the unsung finesse at the heart of his work. Former politician Rod Mackenzie, OAM shows us the parliamentary gates that opened to the cold, regulatory winds of change that robbed Tom of due recognition for his life's accomplishments. With Heather, a daughter's insight; join sister Agnes in childhood and at the end for a forbidden cigarette. Finally, a second leg amputation courted by the cause of his untimely death. Healing Hands, Unsung Voices is a celebratory centennial anthology in memory of a gifted and exceptional human being.

One of the enjoyable aspects of recording the stories of Tom Bowen’s former patients for the 2016 centenary’s “Healing Hands” was hearing about Tom’s work with children and adults with disability. It was delightful meeting former cerebral palsy patients Mary-anne Cosic, Bettye le Marquand and Renee Hutchins who was born with spina bifida and her father Greg Hutchins. Greg and his then wife feared Renée would never walk.

Romney Smeeton recalls the clinic was originally referred to as a “polio clinic” and in 1977 the name was changed to “Handicap Clinic”, or Special Needs Clinic as it would be described today, “There were indeed people/patients with special needs of all ages and all conditions with higher cerebral altered function – kids with spina bifida, cerebral palsy, adults with paraplegia or quadriplegia. They all came with their carers and usually a few more – it was one big family that was sharing Tom’s gift to them. The clinic was free of charge and it was held on one Saturday morning a month and those dates were worked out according to the lunar phase.”

Mary-anne Cosic today enjoys an independent lifestyle and has started a Diploma in Community Services. As a young child, she used to see Tom at Villamanta Street. She remembers his associate Rene Horwood and her cheerful welcome when the doors opened in the morning and the friendships with Renée Hutchins and others. Vivid in her mind was how much fun Tom was, chasing her down the corridor, she in her calipers and he with a prosthetic leg and waving his walking stick. On his ability to find what was wrong and bring physical ease and comfort she says, “He was the miracle man. The people he used to help, you can tell the difference... you could feel it in yourself: I feel better, I can sleep, I can roll over, I can move... when you can’t do it, and someone comes along and lets you sleep a whole night without having to jump up and down otherwise you become very cranky”. There were days where much longer treatments were required, running into hours, the “big moves” days. She remembers Tom in ailing health concerned that his clinic would keep going to look after them and that Romney and Kevin Ryan would.

Bettye Le Marquand was nineteen when her parents found Tom Bowen and she remembers, since her parents didn’t have transport, “Tom came to the house every week for sixteen years, sometimes two or three times a week". She remembers “big days” too where much longer treatments were involved and he carried out procedures from his knowledge of craniosacral osteopathy. Her medical doctors were very impressed with her progress under Tom’s care: “as my back improved I was able to take weight on my own two feet. This was because the spasm had been reduced by having the nervous situation improved, enabling me to have more control over my movement”. Tom settled her spasms down so much that she “was able to be seated at a table without knocking everything off” and sleep at night without thrashing and “kicking off all the bed blankets”.

Renée Hutchin’s father Greg said “I have nothing but admiration for Tommy.“ Their 17 month old baby Renée had spina bifida, Tom gave them hope and was able to get their daughter walking. Renée lives an independent life with a job and it’s only now entering her 40s that knee wear and tear requires the use of a wheelchair for mobility.

Tom Bowen worried about carer stress too and used his contacts and friendships to organize caravan holidays and time out.

Romney remembers this clinic “was very special to Tom”... he didn’t ask, he expected his observers would attend... “if something unusual was happening – like a patient’s last treatment: so determined because Tom had done as much as he could, he would ask us all to be there, Keith Davis, Kevin Neave, Nigel Love, Kevin Ryan and myself. After Tom’s death, Kevin Ryan and I kept the clinic going for another 12 years.”

Tom’s former patients have nothing but love and respect for how he helped them. Mary-anne says she still visits Kevin and Romney when she needs help as do several of Tom’s former patients too. Bettye now enjoys life in Melbourne in a care community and creates artwork in mosaics. Now in her 70s she has warm memories of Tom Bowen and always remembers his birthday was on April 18th.